Giving thanks to the Lord is not only be done in one season, or one time thing only. Giving thanks to GOD is a life style. It is shown in every day life, in what we do, and in what we say. Living with gratitude heart is a beautiful and joyful life.

My devotional reading is from Ephesians 5:20. Apostle Paul reminders us who are believers in Christ to always give thanks and for everything to God the Father in the name of Jesus Christ our Lord and Savior. It means in every thing. Big and small blessings we receive every day. In any circumstances we are in, we need to give thanks to God, who loves us with unconditional love, take cares of us and show us grace and mercy no matter what we had done, have done and will do in the future. For me it is not only a reminder, but also a command to live in thanksgiving every singe day and moment of my life. This is how I added some journal on my ESV Journaling Bible when there is no more space to write on the side journaling space 🙂 Sometimes, God speak more than one from the save verses.

I cut out a large tag size out of Canson 140 lbs. watercolor paper since I am working with watercolor paint. First, I wet my tag with big brush, cover all the tag. Then I picked up the paint with wet brush and added some of the Fall colors using Koi Watercolor paints on the wet tag. Simply just added one color at a time and blend them together. I think this what they call wet-on-wet technique 🙂

Once tag dry completely, I stamped the words and images from the Joy Clair Stamp – Give Thanks stamp set with Versafine Onyx Black ink pad. I used my Faber-Castel pen to write the extra quote and the Bible verse on the arrow. And I scored the top of the tag to give some crips line so I can fold it up and down, then I added my tag on top of the verse I read with Documented Faith Loopty Loop Washi Tape and Documented Faith Heart Squares Washi Tape. Also, I decorated the bottom of the journaling column with one of the Documented Faith – Doodle Scallop Washi Tape.

Also, I am sharing this Bible Journaling page on Joy Clair blog. Hope you can visit me there, too!

I hope you are inspired today and THANK YOU so much for stopping by today. Have a fabulous blessed day!

The new Bible Study is now available in 18 languages. Indonesian is one of them! Amazing blessings and glory to His name. Our prayers that through this study, you can find Him, meet Him, renewed and refreshed by God’s presence, love and grace. 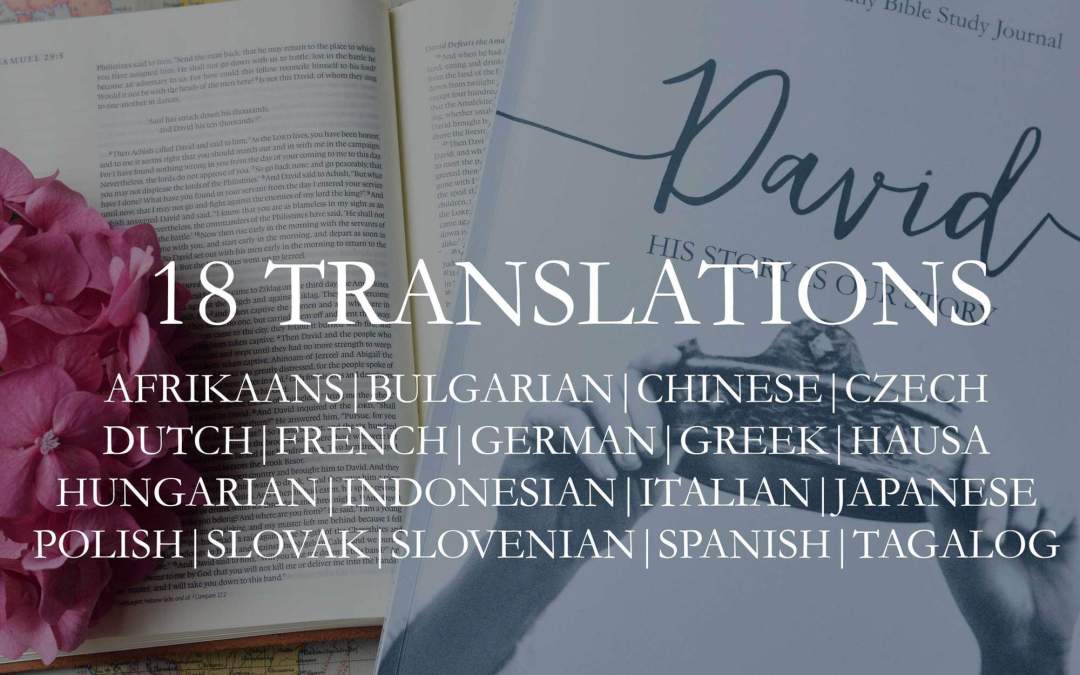 Friends, if you know of a missionary or missions pastor who could use our translated Bible studies, please share this post and let’s work together to give more women access to Bible studies in their language!  Also, share this blessing with your family and friends so that they also be blessed!

CLICK HERE to see the list of languages and more information about this Bible Study and ministry. You can buy the book on Amazon to support this ministry, too.

Thank You for your prayers and supports to all of us, the translators in these 18 languages! Only by His grace we are enabled to do this. Challenges we faced, but He helped us to go through & finished this study.

Praise His name on the highest!

I hope you all had a blessed and fabulous Easter weekend with your families and friends celebrating the greatest love of God shown to the world through the work of Jesus on the cross and He has risen from the death once and for all.

The victory in Jesus, the Risen and Resurrected King of kings, give us hope to keep walking in faith!

His love is so great that not any power could seperate us from Him and His love. Nothing at all. The work of His love revealed in Christ Jesus since the day He sent him to the earth until Jesus went back to the Father, and till the day He comes back in His glory!

“No power in the sky above or in the earth below—indeed, nothing in all creation will ever be able to separate us from the love of God that is revealed in Christ Jesus our Lord.” (Romans‬ ‭8:39‬ ‭NLT‬‬)

Have you ever found any kind of love like this? The love that bind us strongly to the Most High God and Creator of all?

He has been and always with you and I.

Sending you all blessings and peace on today! He is risen and let the eart rejoice and singing halellujah to the King of kings!

“Now after the Sabbath, toward the dawn of the first day of the week, Mary Magdalene and the other Mary went to see the tomb. And behold, there was a great earthquake, for an angel of the Lord descended from heaven and came and rolled back the stone and sat on it. His appearance was like lightning, and his clothing white as snow. And for fear of him the guards trembled and became like dead men.

But the angel said to the women, “Do not be afraid, for I know that you seek Jesus who was crucified. He is not here, for he has risen, as he said. Come, see the place where he lay. Then go quickly and tell his disciples that he has risen from the dead, and behold, he is going before you to Galilee; there you will see him. See, I have told you.”

So they departed quickly from the tomb with fear and great joy, and ran to tell his disciples. And behold, Jesus met them and said, “Greetings!” And they came up and took hold of his feet and worshiped him. Then Jesus said to them, “Do not be afraid; go and tell my brothers to go to Galilee, and there they will see me.”” (Matthew‬ ‭28:1-10‬ ‭ESV‬‬)

“Jesus said to her, “I am the resurrection and the life.

The Bible recoreded this event and that is the truth. Today we celebrating the victory Jesus brought to all who believe in Him. He defeated death and redeemed us from the dead. No more condemnation for those who is in Jesus. When you believe in Him and in all what He has done, you have new life in Him.

Do you believe in Him?

Through what Jesus did on the cross, God provides the way for us to be restored and reconciled with Him. On that cross, there is hope.

“When we were utterly helpless, Christ came at just the right time and died for us sinners. Now, most people would not be willing to die for an upright person, though someone might perhaps be willing to die for a person who is especially good. But God showed his great love for us by sending Christ to die for us while we were still sinners. And since we have been made right in God’s sight by the blood of Christ, he will certainly save us from God’s condemnation. For since our friendship with God was restored by the death of his Son while we were still his enemies, we will certainly be saved through the life of his Son. So now we can rejoice in our wonderful new relationship with God because our Lord Jesus Christ has made us friends of God.” (Romans‬ ‭5:6-11‬ ‭NLT‬‬)

Give thanks to the Lord for what He did for us on the cross while we are still sinners. No one would do die in our place. But Jesus did. God planned it since the first day Adam and Eve disobeyed and sinned againts Him. God has made the way by sending Jesus to the world.

There is no other way than through Jesus, the Son of God, we – sinners – can be forgiven and saved from the eternal death. He dies so we may live.

Come to the Father through Jesus, He is waiting for you, today. And rejoice for the day of victory has arrived!

Love God Greatly is a women ministry providing Bible studies in their heart languages to help, equip, and encourage women to love God greatly with their lives.

By purchasing a Love God Greatly Bible study journal, you are helping women around the world have access to Bible and giving them opportunity study the Living Word in their heart languages and helping to equip our translators to reach their nations with God’s Word. Visit Love God Greatly Store to get the English Bible study books for you and your kids.

Now, the bible study journals are available in 30+ languages and it is included Indonesian and Manadonese.

You can download a copy of any of the Love God Greatly in Indonesian for FREE here.

*** For the moment, the Cards for Little Hearts Card Drive is postponed due to the Covid19 situation. Please do not send your cards until Christina post an update. To keep updated, visit their website and sign up for their newsletter. THANK YOU SO MUCH!